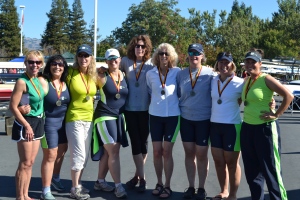 I’m fourth from the left — 4 seat for this race. Graham thinks my sunglasses are goofy. I think they’re perfect for what I need on the water…and I brought home a medal, so phthphthbbththtt.

We beat the only other boat in our category by 1:28…and we passed them on the course, which was really fun (they started first). Our scores were low for the women’s masters 8s across the board, for which some have credited the tide; it was in our favor, although we rowed against it to get to the start.

I’ll take a little help from Mother Nature, but I won’t take any credit away from this crew. We had two rows together before the regatta, one of which was with the excellent cox we had for the race, and it was a strong, solid boat. We came through the chute at 30ish (and with a couple of hoots — sorry, race fever!), and stayed at or above 27-28 for the whole course with some sub-2:00 splits in there. Coach was expecting 26 with some bursts at 28.

Not bad for novices.

Next up:
Head of the American
Lake Natoma, Sacramento
October 25

So, rowing has been going well.

I like it. A lot. Which means I’m working my ass off…at least as much as I can with a toddler who still sometimes wakes himself up before 6 a.m. (and, if he doesn’t put himself back to sleep, may chat amiably with Blanky and Pooh Bear for up to an hour before he requires freedom). Fortunately, whoever doesn’t have practice the next morning is on baby duty the night before. I haven’t had to miss practice, but land workouts are often cut short.

I was fretting about this until my 5k erg test. Since then, I’ve decided that “Make the most of every practice and do as much as I can on the off days” is a reasonable expectation. As far as I know, we’re the only ones on the team with a munchkin this little.

It’s paying off, although not in the way people seem to expect. The two most frequently asked questions are —

Q: So, how much weight have you lost?

A: Pretty much none, although my pants are a bit loose and I usually feel like a million bucks wrapped up in badass and buoyed by fireworks. I’m not yet in the shape I want to be in, but DAMN, I feel good. I feel strong. As usually happens, too, when I’m really active, I’m less inclined to eat poorly; I want soup and salads and smoothies. With our schedule and circumstances, though…it’s a challenge, for sure. Some weeks, I eat to fuel and recover. Some weeks, there are pizza rolls. /shrug

Q: You must have some serious guns, huh?

A: Not really. Contrary to popular belief, rowing is mostly about the legs. Hooray! I’ve got those. The trick is to take all the power in my massive lady-quads and transfer it to the oar through my arms. When I do it right, it feels like flying and the cox says lovely things. When I get lazy, it triggers my carpal tunnel and tweaks my outboard elbow, and the cox invariably makes a comment about lengthening “our” strokes.

In early September, four of us women from the novice squad moved up to practice with the intermediates on the women’s team; all of the novice men switched up to the men’s team. I started on a Saturday practice, got tossed into a 4 with two intermediates and an advanced, and basically had my ass politely handed to me. I wasn’t used to the speed or the volume; the last two weeks of practicing with the novice crew were comparatively easy as we ramped up with a new novice coach (who is excellent, but, hey, a transition means a reset). Fortunately, it was still a pretty good indicator of what I’d gotten myself into if I wanted to race this season (I did), so it didn’t scare me off. Monday morning, I was back on the erg.

It was a little wonky moving to the other squad. Everyone was really nice, but no one knew we were coming. And apparently, it was unusual. I know there hasn’t been a separate novice crew with a separate schedule in the recent past, so perhaps everyone was just surprised that we’d been split up. Certainly, the then-new novice coach was surprised. She’d been expecting to keep everyone together for a year.

Anyway. Things are smoother now and everyone’s been great. That’s our women’s novice 8 up there…at least, it was for this race. It’ll be a different lineup for Head of the American.

I’m fascinated by lineups and other decisions well above my pay grade. One of my fellow June novices probably beat me out of the mixed novice 8 — she had me by less than a second on the 5k test a couple of weeks ago. One of the dudes from my novice group beat Graham out of the same boat…all of which is a bummer, as it was our first and last chance to compete together between now and the end of my novice period. (Longer, really, depending on whether/when Grayson gets a sibling).

And yeah, I wanted to race twice. Two 5k races…plus the 5k+ to row to the start each time. I wanted that, because something about this sport makes you want to go until you just can’t go anymore. Halfway through, you can’t wait ’til it’s over; once it’s over, you want to go again.

I also volunteered to work on the content for the team’s website, because of course I did. I’ve wanted to get my hands on that site since Graham joined; unbeknownst to me, someone was working on a redesign and just needed another someone to wrangle existing content and keep it up to date. Well, hey, sign me up! That should also easily cover my volunteering requirement for the club…until pretty much the end of time.

It’s been a little over four months since I picked up an oar, and y’all don’t even want to know how different my life feels right now.