I was supposed to be learning how to use the erg safely.

We have an erg, you see. We got it last year because land workouts at the boathouse on top of three practices a week are a lot to ask of a new dad who needs a ride to and from. Graham really likes rowing, though, and it helps his back more than anything except maybe vast quantities of gin, so it’s got my full support.

The erg also got the entirety of my 2013 fitness subsidy, which may have only covered the shipping cost. Que sera, etc. (Big hooray for tech companies that do fitness subsidies, though.)

So, cut to this year…

Rowing is outstanding exercise — everyone knows that, right? — and this still-new mama needs to build back some core strength in the worst way. (Our kid, powered by yogurt and watermelon, is growing. AGAIN.) Graham, still in his novice period, could show me some form basics, but thought I should learn from someone with more experience.

When National Learn to Row Day came around and East Bay Rowing Club did their thing, I signed up, showed up, and…

Well. This was not unforeseeable.

After the event, there was a two-week trial. I had a lot of fun at the Learn To Row and I already knew it was a good club full of awesome people; I carry the dubious distinction of being the “wife” most likely to turn up at regattas (which, I’ve gotta tell you, feel a lot like band reviews).

If you’ve been reading along since Junior made his appearance, it may have become apparent that I don’t do a lot in the way of leisure activity these days. We are indoor cats, as a general rule, and I have been very, very tired for a while. It’s been a long time since I had A Thing. Desperately needed pedicures don’t count.

He’s right. Sara coaches at Mills, but she’s a native New Englander with a lifetime of experience and a Yankee sensibility I can get behind. Someone as anxious as I about learning as much as possible asked about the consequences of missing practices for work or travel.

“People in masters rowing have lives,” Sara shrugged, very meh about the whole thing. “You drop the oar, push the water, repeat. You’ll pick stuff up at every practice, but it’s pretty simple, really.”

Good advice, that. And handy to keep in the back of my mind, because the first practice after our recent trip back east was the worst yet…after the last practice before vacation had been the BEST! EVER! We got to take out a 4! I got put in stroke seat! WE ROWED WITH ALL FOUR! AT ONCE! NO ONE DROWNED!

It was awesome. Then I came back after a break, stroked an 8, and flailed my face off.

But, next practice, I sat in stroke again and we had our best row yet. Power 10s and all. POWER 10S. It feels an awful lot like racing, or so we were told.

SEE WHAT’S HAPPENING HERE? This shit’s addictive. (They do warn you…) I’ve been doing this less than two months, and what stands out most from the Learn To Row, now, is the member of the women’s team who said, “I wish I’d found this earlier.”

Yeah. I get that. This is beating the crap out of me without actually hurting me.

A little more context: Almost two years ago, a little bit pregnant, I stopped training for what I thought would be my first half marathon, the Healdsburg/Wine Country Half. I got up to double-digit mileage and my right hip quit on me — not a full-blown injury, but a persistent pain that made my OB/GYN tell me I was done training for anything. Boo…but it was sort of a blessing, though, because running was starting to feel like a drag.

For me, learning to row feels like nothing else so much as when I started color guard, when I sort of deliberately fell into an athletic thing that made me want to work my ass off. Running? Nah. I’m just in it for the endorphins and maybe the way my Running Butt looks in jeans…which I suppose is literally working my ass off. But I do not wish to run races or long distances, or with a group. (P.S. I’m running again. On my off days. 30 minutes max, plus some core work.) Knitting? Excellent means to several ends, but not, like, a thing I’ll get up before 5 a.m. to do.

In spandex, no less.

Honestly, the comparison to guard is the most apt I’ve got. It’s a team thing that feels more like art than sport. (Also, spandex.) If you don’t get to the boathouse, some of your teammates might wind up doing land workouts instead of getting on the water, and that’s just mean. There’s accountability beyond the point of “I paid for this and I’m damn well going to do it.” Eventually, anyone who’s not really into it seems to wash out.

Plus? It’s fun. It’s fun in the way that mastering hard things is fun, and fun in the way that shared misery can be fun. Being on the water is great! But the estuary is pretty gross. Having powerful legs is great! But, oh, my hands are getting tore up. Likewise, color guard was fun because I liked doing it, but also fun because hey, d’you guys remember how hard it rained in Victoria that one time when the parade route was uphill both ways? And dude, remember when the bus broke down in France?

Oh! And there’s this: 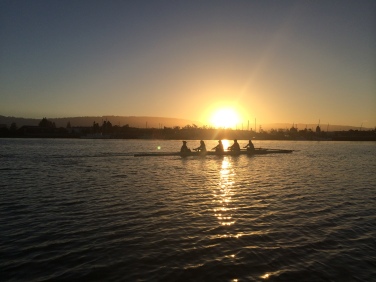 Credit: Jordan Norberg, who’s coaching the EBRC novices until she goes back to coaching college dudes in New York

Not my boat, but it is my crew. I mean…you know? I’m up before 5 a.m. anyway. This beats the hell out of organizing Duplos.

And just like that, we’re both rowing. Once my current coach goes back to her college coaching gig (and oh, how we will miss her!), Sunday’s the only day no one will have practice. Right now, we have the weekends off and overlap on Fridays; I’ve gotten all the Friday practices because I’m learning, but this week I’m out. Graham’s new interim coach was our assistant coach during my two-week trial, and…well…let’s say my novice group has benefited from such excellent coaching that he’s excited to get schooled a bit. (Sustained coaching for his team has been a challenge this year.)