I think I can say that my first season was undefeated. I don’t really know how that terminology applies for masters rowing, but each boat I was in brought home gold from each of our three head races this season. The lineups were slightly different each time and I don’t think “undefeated masters novice rower” is a resume bullet, but I’m definitely proud of those medals. 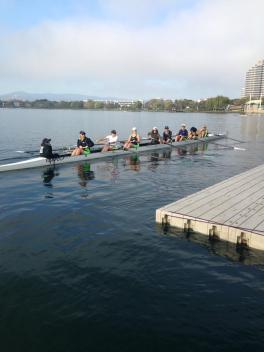 That’s me in 6 seat at last weekend’s Head of the Lagoon. –>

Every picture of me from the regatta shows a scowl of moderate to upper-moderate intensity, but I swear I was having a great time. Race face, they call it. I try to save the competitive streak for when I’m on the water. No Cobra Kai jogging around the other crews, obvs.

Also, I seem to have grown a competitive streak. Who knew?

Unlike Head of the American last month (where we still won, but by the skin of our teeth), the conditions, race time, and lineup were right on the money for me last weekend. I love 6 seat. I love the stern pair in this boat (too bad for me, as our stroke for this race is closing out her novice period). I love races that end in time for us to help with re-rigging and get home before the baby goes to bed. I love the food that the juniors’ parents bring to the tent.

Also, I love my team.

It’s been an unanticipated theme in my life to be surrounded by amazing women who are older than I am. When I turned 21, my roommate was turning 30 the same week; we partied together (a lot) and 30 didn’t look like such a bad deal. When I was in my mid- to late-20s, I worked with a cadre of women in their early 30s who were…honestly? Probably a lot like my mom was when I was a kid. My favorite memories of her are from her mid-30s, when I thought stealing her clothes was the BEST. But those work friends were definitely Grown-Ups — they had houses and kids and responsibilities, but they also had a lot of fun and some of them cursed like sailors. I learned from their example that taking care of your needs, even when you’re a grown-up and a mom, is critical. (I forget from time to time. I think we all do. But I don’t let myself feel guilty about doing things on my own to maintain my health and sanity.)

(The thing about masters rowing, though, is that guessing someone’s age is impossible. Everyone I row with looks at least 5 years younger than she is. At LEAST. I cracked up when my stroke from this last race told me how old she is. And my I-got-carded-again stories have increased dramatically since I took up this sport; I’ve been mistaken for younger since 25ish, but the ID requests for wine purchases had died down in recent years.)

It’s not just that these women are active. Lots of women are active throughout their lives, especially here. My teammates are athletes. Part-time athletes, to be sure, but erg scores don’t lie. And it’s not that they’re nice and they care about each other. That’s also true for a lot of people, whether they’re work friends who hold baby showers or a running club that trains together.

I think it’s that everyone there has chosen to train in a sport that they can’t win on their own (we mostly race 4s and 8s). There’s something in that, in the accountability to your team and the trust in your boat that feels different from training with a club to run a marathon, or playing basketball twice a week. Rowing, at our level, doesn’t have much space for stars. That erg score shows potential, but not value. You still have to move the boat with 3 or 7 other people, in sync and with run, and while you do it, even if you’re in stroke seat, you are not calling the shots. It feels like a bigger trust than you might put in a teammate to set you up for a lay-up — maybe because we go backwards?

I’m still new here, but what I’ve come away from these first months and this first season with is this: “Stars” aren’t stars in our club. The stars on our team, looking up from the bottom of the roster, are the women who can confidently row any seat, cox any boat, find the missing hardware, bring the wine to the holiday party, cheer for every boat and every lineup, pull in the launches, and talk this overzealous novice through erg tests. They’re the ones who learn people’s names and stories, who remember injuries and anxieties, and who show up when a teammate needs support off the water. When someone catches a crab, even during a race, the stars on our team are the ones who say, “Nice recovery! Way to power through it.”

Not a bad lesson to learn at 37. I like these ladies, it’s true, but I also like how they Adult.

So here’s the deal, crew: I’ll keep rowing my face off (and keep screwing up your age handicap for regattas), and you keep showing me how to be. Sound good?