Okay, February should  barely even count. February is short! Also, it’s Mommy’s busy season at work, so February barely feels like a month. I call do-over.

Let this be a lesson to you, son — Mommy is not actually in charge of time. Thankfully, you won’t read this until after we make it through whatever “Time out” will look like in our house.

This month’s challenge: Feeding you. About a week into your 10th month, you decided you were DONE with breastfeeding. You did not wean down. You did not give any outward signs, aside from being as distracted by ALL THE THINGS as you’ve been since you were three and a half months old. You nursed down for the night, then woke up for your first “comfort nurse,” which is standard when you’re teething, but you would not nurse and you were pretty pissed off about it.

Also? You were still (and remain) unenthused about solid food. And there was no age-appropriate formula in the house.

One might suspect that you did not think this through very well, young man.

So we scrambled a bit and have given you every opportunity to change your mind. We were planning to carry on for at least the first year, but when you were done, you were done. And that’s okay. (Well. It’s okay for you. Mommy had kind of a hard time with it, but that’s not your fault. That’s just dumb old biology getting in the way again, and that’s a post for another day.)

And you know what? None of this should be a surprise. You’ve got an independent streak a mile wide, emblazoned with neon No Parking signs. You are particular in your habits and desires, to the point of being hilariously predictable. 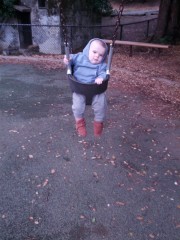 I would say you’re a little OCD about it, but only if we can redefine OCD as Obsessive Chaotic Disorder.

You are less invested in the freedom of your squeezy stacking blocks, but I think that’s because you just don’t like them as much. They don’t make nearly as satisfying a “clack” when you bang them together. Your “Free The Toys” campaign does extend to puzzle pieces, however. Those do make a satisfying “clack” upon impact.

Are you seeing a pattern here, buddy? The louder the clicky-clacky sounds, the happier you are.

Which leads me to one other challenge: Fingernail trimming. Nursing was my ace in the hole, the only time I could trim your terrifying fingernails without triggering an epic fit of whiny wriggling. (You are an Olympic-caliber wriggler. Don’t let anyone tell you different.) Without that, what was I going to do?!

Simple. Now I just pull out my phone and open up the video of my old friend Jon‘s recent beatboxing solo. That’s 4.5 minutes of prime clicky-clacky distraction. So far, this works better than anything else we’ve tried. You’ll watch him and smile and forget for a few minutes that I’m removing pieces of you without your consent. 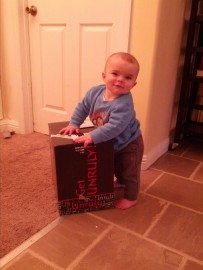 It’s possible that boots-and-catsing at you for your whole life has…left an impression. Daddy probably won’t mind if you become a drummer, kiddo, but those piano lessons are non-negotiable. (P.S. Pianos count as percussion.)

We spent this month deep in Leap 7, defined by a “knack for destruction.” Honestly? You’ve kind of had that going for a while. I see your understanding of sequences growing more in how you’re learning to walk. You nailed crawling and you never stopped pulling up on everything, and now you’re pushing things around in a way that reminds me of nothing so much as how we kids all learned to ice skate (we pushed wooden chairs around on the pond). You’re more careful in this than in anything else, and I can see you engaging your muscles and balance in order, catching yourself, learning, and adjusting.

And then I see you standing unassisted for longer and longer, and I get so, so excited for you!

Anyway, you do know that some things have to happen in an order, and some things go on or in other things. You sometimes stop drinking your bottle before you’re done so you can practice putting the cap on, and taking it off, and putting it back on, etc. And when you wake up in the middle of the night for a quick 5 ounces, you know to bend down and grab your blanky just as I start to pick you up. (You don’t do this when it’s time to get up for the day.) A week ago, I was picking your blanky up; this is just one of the many, many manifestations of your Do-It-Myself attitude.

This month, we’ve noticed more and more how much you like solo play. There are times when you want to be on our laps and times when you’re all, “See ya!” and you take off to explore until you get bored, hungry, or stuck. You’ll dig into your toys or investigate some drawers or pull different books off the shelf. (These are not books you want read to you. These books are purely for mess-making enjoyment.) You’ll practice walking with your Rocktivity “Walk N Roll” Rider. Eventually, you’ll come back, just to check in or because you’re ready to eat. We didn’t really think about this change that much, though,until someone commented on how well you entertain yourself. It’s fun to watch you play, and we do get down and play with you…but you’re very clear about wanting play by yourself sometimes.

You are a very, very vocal little guy and still love experimenting with volume; the kitchen acoustics that are great for singing are equally great for yelling. You have excited squawks and plaintive whines and syllables that sometimes come out in an order or at a time when it almost seems like you’re saying something on purpose.

You are inquisitive and rambunctious and joyful, from your head down to your toes. You are also determined; when something is in your path, you toss it aside without a second glance and continue toward your goal. You still have fussy moments and fussy periods, and sometimes we have to remind ourselves that you’re a person, not just a baby, and all people wake up on the wrong side of the crib from time to time. Mostly, though, you’re only fussy when you’re tired or hungry (just like Mommy, really). And you obey our few safety-based commands rather well for a tiny, still-newly-mobile id.

When you stopped nursing, I worried a little about what would happen to our cuddle times. See, when I say you’re rambunctious and determined, I mean ALL THE TIME. You are not a snuggler, my boy, not even when you’re sleepy. I knew I would miss the quiet, relatively calm time with you. Instead, we now have Reading Time. The week you stopped nursing, you started sitting in my lap for, I don’t know, half an hour at a time?, reading Click Clack Moo and Brown Bear, Brown Bear over and over again, with Moo, Baa La La La added as needed.

I love you,
Mommy

P.S. You have four teeth now, although the top ones aren’t all the way in yet. You will eat some solids, but you mostly stick to puffs, Mum-mum crackers, and the newly introduced freeze-dried yogurt bits. Basically? You only like Baby Kibble.