For a while on Sunday night I thought I was torn about this.

The more I think about it — and the more I see people celebrating (via Storify, which you should know is kind of awesome) — the less torn I am. Also, the less comfortable.

I get it. I really, really do. I was living, working, and going to school in DC on 9/11. I was the first person in my office that day, but not the last; just two blocks from the White House, we were evacuated and we left as a group. I watched the smoke from the Pentagon and the tanks in my neighborhood. I visited Ground Zero that November.

But an assassination isn’t justice, no matter how good it feels to know that a mass murderer is dead. It’s vengeance. It’s complicated vengeance, because I can’t fault or judge the people closer to the attack — the widows, the orphans, the communities that lost so much — who might still be cheering even now. Vengeance is satisfying. Vengeance can feel really, really good.

It’s also easier than justice. Justice, by the laws we chose to put in place, asks questions first and shoots later.

Here, again, it’s complicated: What questions were there to ask? Osama bin Laden put almost 10 years of confessions on the public record. In what court, in what country, could his presumed right to a fair and speedy trial be upheld?

He doesn’t have that right, you might say. Those are our rights. But if the rights we demand, the rights for which our soldiers fight and die, the rights we consider inalienable are only for Americans, then we’re doing it wrong. We are playing fast and loose with our so-called self-evident truths. Justice demands evidence and trials and holding ourselves to a higher standard, even if it’s hard. Even if it hurts. Even if it means Osama bin Laden isn’t shot on sight.

This was the easier way, certainly. It’s so much easier than if he’d been captured and tried and, presumably, executed. But when has the easier way in good versus evil ever turned out to be the right way? I didn’t want to sit through due process any more than anyone else, I suppose, but when has my discomfort, my anger or grief, been a good reason to set aside a basic principle?

The 9/11 attack briefly brought out the best in us. Osama bin Laden and his bogeyman mythology have brought out the worst ever since. I would hope his assassination, however easy to justify, signals the end of a decade of escalating jingoism and “America, fuck YEAH!” attitudes, but then I saw the celebrations. In the end, bin Laden got what he wanted. We’ve been torn apart, he’s been martyred, and his cause lives on.

I think the solemnity in the Situation Room photo from the White House better fits how I feel about the death of the bogeyman. A human being has been hunted and killed by my government, in my name. I am no more comfortable with him dead than I was with him alive. 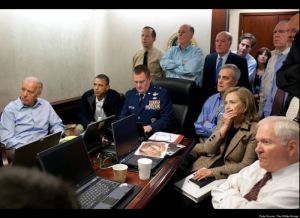 President Barack Obama and Vice President Joe Biden, along with members of the national security team, receive an update on the mission against Osama bin Laden in the Situation Room of the White House, May 1, 2011. (Official White House Photo by Pete Souza)

What other shoe? »
« Take me to my city by the Bay