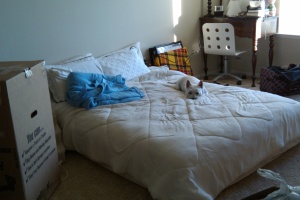 He’s having a grand old time in our new home. He’s adjusted beautifully to a two-walks-a-day schedule and has not had one accident. He was originally trained in a high-rise condo, so he knows how to use the puppy pads we put out for him. We’ve made sure he knows they’re there, but each time we point them out he sits on them politely and stares at us, like, “Yeah, these are for babies. I got this.”

(Rodney, for the last couple of weeks, has been the Puppy-Trainer-in-Chief at Graham’s parents’ house. They are now on their own with a fast-growing white mini-Schnauzer who’s about half-house-broken.)

It took only two or three days for Rodney to initiate his usual tug-of-war and racing games, but that might’ve happened faster if we weren’t surrounded by boxes. (Still. Yes. We’re figuring out storage solutions and a donation schedule.) It took only three minutes for him to jump up on the bed and snuggle in. (This is allowed.) He’d going to be so sad when the bed frame arrives today — he’ll have to use his stairs or wait for one of us to lift him up, and that won’t be nearly as fun.

But! It will put the pillows out of his reach, which will save them from his attempted sexual assaults. Rodney, it seems, is asserting what little dominance is in his mild, “I so don’t need to be the alpha dog” nature by trying to sow his wild oats into anything fluffy after each walk.

Not that he has any oats. He seems to be easing off the behavior anyway…which either means that he’s obeying us or that halfheartedly dry humping a pile of laundry isn’t as fun as one might think.

We’re working on a bit of re-training, partly to curb the barking that was okay in his last home. He’s a well-mannered little guy, but he’s kind of confused about why it’s usually okay for him to get on the furniture but isn’t okay when we’re eating dinner (we don’t have a dining room table yet). He’s good with “sit” and “up” — we’re working on “down,” but he’s not a big fan. He is a big fan of string cheese and baby carrots, though, and has learned that I’m even more stubborn than he is. We’re also working on leaving him alone for longer and longer periods of time (when we’re not waiting for furniture deliveries or maintenance guys).

The title of this post is absolutely true, by the way. Rodney has charmed the socks off the neighbors, the neighborhood dogs, and random passersby, mostly by virtue of being calm, slightly timid, and very, very cute. Even some rough-looking neighborhood kids fell for him as they passed us on last night’s walk — instead of cussing or cat-calling, they were like, “Man, that’s a great little dog. What kind of dog is that?” Most dogs are bred to look like they’re smiling, but Rodney’s happy little face seems to make the people around him smile, too.

Including me. Although Rodney and I bonded on my visits, we didn’t know if it would carry over into a full-time relationship. Now, though, he sits on my lap to look out the window, curls up by my side when I’m reading, and looks for me if I’m out of sight for too long. We’ve gone on a couple of solo walks together and he accepts that I’m in charge. He also hid behind my skirt yesterday when there was a baby in the house (babies are scary). I love this little guy.

Last night, we found him sleeping in my closet with his nose in one of my shoes. I’d say the feeling is mutual.