*Note: Day 1 was supposed to be Friday. Thanks to the air traffic controllers at Chicago O’Hare, Day 1 was Saturday, 24 hours later than we were supposed to arrive, and the day of the wedding we traveled to Australia to attend. Thank you, Chicago O’Hare, for a night at the South San Francisco Travelodge and two meals at IHOP.

Actually, thanks to Graham for (a) talking me down when my flight closed before I landed at O’Hare, (b) getting us a room at the Travelodge while I was in the air, and (c) cheering me up in spite of myself…and in spite of my chagrin about my manky clothes.

We arrived, we checked in, we got settled. I went for a run in the rooftop fitness room. Strangely, it seems to have helped with the jetlag. I think so, anyway. Graham is naturally a night owl, and I am…not. So very not. I’d say my sleep patterns evened out and the running helped. He might say that I was a sleepyhead.

The cabbie had a hard time finding the wedding venue, but we got there in the end. I think we all thought it was out sort of on its own, but it wasn’t — it was tucked away in plain sight, next to a pub of which the wedding guests later made good use.

Check out our old pal, looking gorgeous and radiantly happy:

Sportik, on her wedding day

Sportik and I met under auspicious circumstances. I was on a first date with the boy who would become my high school sweetheart and first love. We were sophomores, and Sportik was a freshman…in the marching band, which is how she came to know my date. At the school dance, as we walked into the room where dance photos were being taken — something we would do repeatedly for the next year and a half — we saw a chalkboard message that may or may not have been penned by Sportik:

Or something to that effect. In a bloody heart. There may even have been an arrow through it.

Throughout the evening, band kids kept coming over to ask if my date would dance with Sportik. Later, I realized how unlikely it was that it was at her urging. She had a crush, and the matchmakers were…inspired on her behalf. My date said yes, to stop the intrusions. I said it was okay (which it most certainly was not). When the next slow song came along, he danced with me, not her. The rest, as they say, is ancient, dusty, rose-colored history.

She knew Graham through band as well, having taken his slot as right guide when he went on to be Foothill’s Greatest, Most Awesome, Undefeated Drum Major (with all due respect to the drum majors during my years…).

I joined the color guard the following year. Sportik and I got to know each other, became close, and frequently roomed together on band trips. Later, when she was ready to come out, I think I was among the first she told. 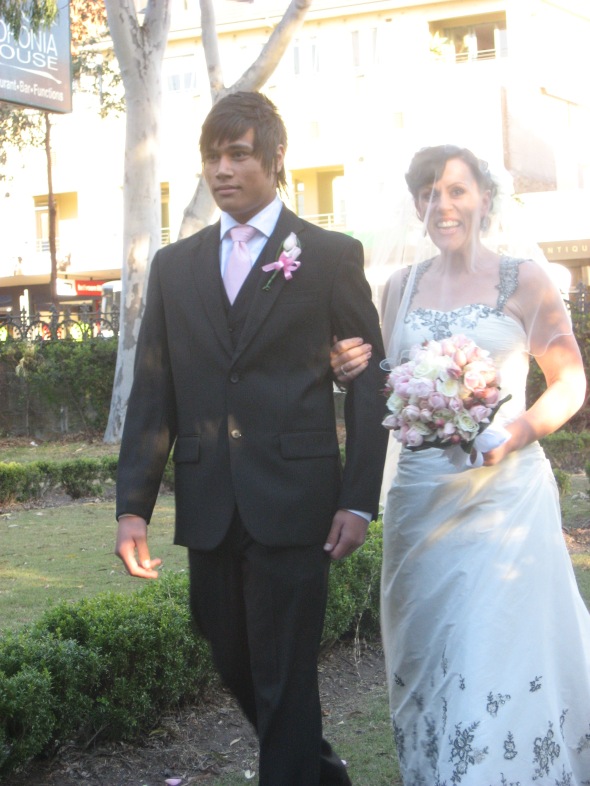 Sportik and I lost touch for a while, but Myspace fixed that (Facebook took its place), and we caught up quickly. As it happened, she was the one remaining friend Graham and I had in common. We would each talk to her about each other, and she finally got us to talk to each other, instead.

And the rest, as they say…etc.

We figured, once we saw each other again and knew that…well, that that was it, we owed Sportik one hell of a debt. I think I wasn’t supposed to know how big a role she’d played, but I did. (Sportik, if you’re reading this, you should know Graham can’t keep anything from me.)

(Which is for the best, really.)

Truthfully, Sportik was playing matchmaker in her spare time. Her full-time gig was deciding to move to Australia, then making it happen with — you’ll have to trust me on this — no shortage of divine assistance.

She moved, she thrived, she fell in love. We’d already decided we’d have to go visit her — when she asked us to attend her wedding, we thanked her for deciding when we would take our trip.

Because if you don’t travel halfway around the world for someone’s wedding, when the hell will you visit? I mean, really.

Kristie tears up and laughs instead, immediately endearing her to my heart.

A word about Kristie: I love her. We love her. If the happiness on Sportik’s face isn’t enough (and really, that much happiness should be enough), let me just tell you that she is open and loving and funny and SO much fun to hang around. And she can cook like the dickens. We didn’t really know any of this until later in the week, but the wedding and reception were an awfully good indication.

P.S. I love the Australian way of kissing the cheek of someone hello, even if you’re just meeting them. I assume it’s an Australian thing, because it’s so unlike Sportik that I was forced to conclude that it came with her visa.

Cutting the cake, which broke the knife, which simply caused more merriment.

I should note that, after three glasses of wine at the pub while the family did wedding photos and some more drinks when the cocktail hour started, and some more wine with dinner, I decided to do a toast. Hey, the floor was open! And I felt so bold! (We did split some fish and chips at the pub to make sure there was something in our stomachs…we not completely wanton and irresponsible.) I’m told that I didn’t make a complete ass of myself. Which is to say, the other guests were totally charmed by my accent.

It was one lovely party. We had a fantastic time, and could not be happier for our friend, her wife, and her new family.

One of Sportik’s good friends, Stefan Petersen, caught us having a fantastic time:

(FYI, this was an extraordinarily good hair day/night with the new cut. I was awfully happy with it, and with the dress, which I considered flapper-y enough for a vintage-themed wedding.)

When I grow up, I want to take pictures like Stefan. And evince as much joy as Sportik and Kristie did this day.

Next up: Day 2, a watery journey to the indoor/outdoor wildlife repositories and Chinatown.