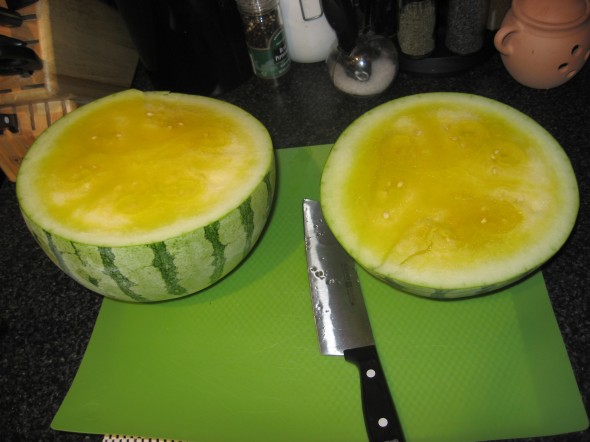 Hey! There’s gold in that there watermelon!

I was confused when I hacked into this after lunch today, and am slightly more confused now that I’ve asked Google about it.

But what was it doing at my farmers’ market? I know it’s early for watermelon anyway, but this variety is generally grown in Mexico, Arizona, and California. Could be a mis-sorted seed or a fluke…or someone loves me and is sneaking California produce into my neighborhood!

That same someone is watching out for my weight–yellow watermelons have fewer calories.

I picked up some peaches, too, and what are likely to be the last local cherries this year. I have not decided whether they belong in a fruit salad, as originally planned, or a seasonal crumble. I’m stalling–pitting cherries sounds even worse than dicing up Braeburns for apple cake.

I had a craving for yuppie pizza, so I also got some squash. I sliced it super-thin with the mandolin (yes, using the guard) and layered it on top of some honey goat cheese. It made G barf from 2,500 miles away, but I thought it was delicious…

On the bride’s side »
« How my garden does grow