I feel pretty/Oh, so pretty

Shotgun’s years as a single woman, I’m happy to report, have been properly feted.

This weekend, thanks to the excellent planning of her maid of honor, we celebrated her upcoming walk down the aisle with a very personalized overnight trip to Manhattan.

We began with a train ride from Union Station to Penn Station, complete with pastries and mimosas low-acid orange juice, and oh, I do so love the train! We judiciously avoided the quiet car, and found out at our destination that we greatly amused at least one of the other passengers. (If I had to guess, I’d say the men on the train were more amused than the women, perhaps because they’re not usually allowed to attend bachelorette parties.)

The biggest surprise of the weekend, I believe, was our first stop after Penn Station–we split two rooms at the Waldorf-Astoria, which is not, in fact, a hostel, as we’d told Shotgun to expect. The Waldorf is all it’s cracked up to be, although I think I might have had overly grand expectations for the rooms. In retrospect, I think I like that the rooms are comfortable and understated. After the grandness of the first impression, it settles the hotel into a more historic experience.

And then they sent up champagne in honor of the occasion. There’s something to be said for good service and a touch of glamor.

We experienced lunch at Stage deli. I started to write that we grabbed it, which would be accurate–we were on a tight schedule and they do try to get you in and out in less than 30 minutes. But it was an experience. The sandwich, it was as big as my head. I ordered a simple turkey club, being more tomato-friendly than in my younger years, and proceeded to eat more bacon on one sandwich in one city than I have eaten in the last six months combined. This was in addition to the pound and a half of sliced turkey, the three slices of rye, and half a head of lettuce (which I took out, because otherwise the sandwich was too damn tall to do anything more than gnaw away the edges).

From Stage, we hoofed it to Palace Theatre in Times Square for a matinee of West Side Story. I know the story and I’ve seen plays and musicals, but somehow, I’d never seen one on Broadway before.

(This was a grievous oversight on my part. Now that I have recognized this, I feel it should be addressed. I won’t live within a quick train ride of Broadway forever, and we don’t have to stay at the Waldorf every time…)

There’s something about it, Broadway. I mean, a theatre’s a theatre’s a theatre, right? Mezzanine here means mezzanine there. Modern acoustics and stage design allow the possibility of building a better theatre in Boise than in Manhattan. But the lights, the history, and the sheer accomplishment of the performers in reaching Broadway just gets to you.

Especially if, say, you were once an adolescent girl with dreams of going to the Jellicle Ball.

Shotgun cried, and not just at the end (which is when I cried because TONY!). It might have been Maria’s voice, or the pit’s performance. Or it might have been the picture of her bachelorette coming together in her mind, and the love and memories that her sister put into planning it.

Back at the hotel, we freshened up or changed clothes and gathered up another friend who came in for the dinner portion of the weekend, then headed back to Times Square for dinner at The View, the rotating restaurant at the top of the Marriott Marquis.

From that perspective, even New Jersey looks good.

If you should choose to take on the buffet at The View–which I can recommend, as it’s the only buffet in 10 years that hasn’t upset my stomach–I urge you to remember that the elevator that gets you there, the express elevator that rockets you upward as if launching you into space, will also carry you back down. At the same pace. 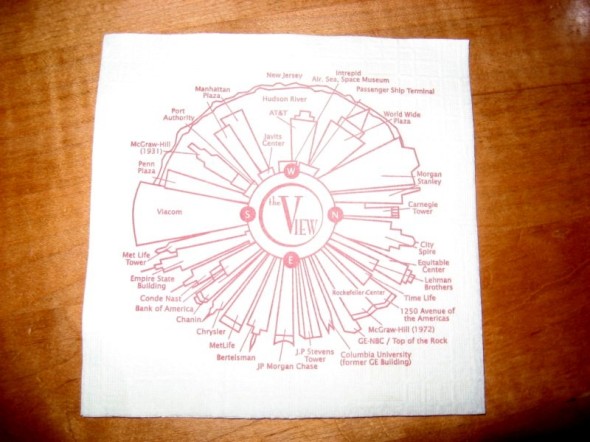 We were there at about sunset, and the view was incredible. You know the scene in Mary Poppins where they’re up on the rooftops with the chimney sweeps, marveling at a historical and somewhat mythical city, seeing it from a different, seemingly secret angle? It was like that, but with less soot and more martinis.

On average, we’re about five years past the stay-out-all-night-then-nurse-a-hangover stage, we were back at the hotel between 12 and 1 with the bachelorette’s blessing. The evening ended on the same note the wedding will strike in less than a month–classy, sophisticated, and very full of love.

How my garden does grow »
« Bzzzzzzz